Most Expensive Weddings in the World

If you think William and Kate had the most lavish wedding ever, take a look at some of these weddings that have created a benchmark for luxury!

Home / Dresses / Most Expensive Weddings in the World 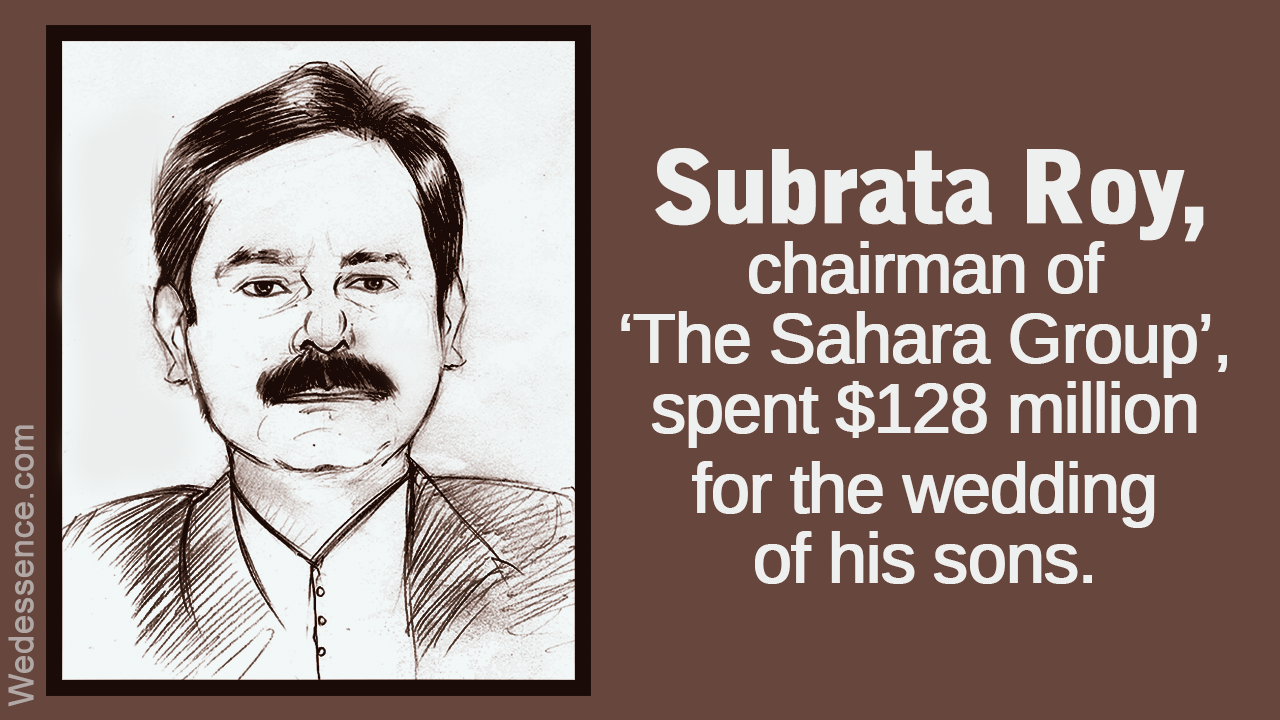 If you think William and Kate had the most lavish wedding ever, take a look at some of these weddings that have created a benchmark for luxury!

Weddings are joyous occasions and are usually celebrated with great pomp and show. However, the idea of pomp and splendor is sometimes taken to another level by those who know how to do it in style, and can afford it. When we see the grandeur of royal or celebrity weddings, we are simply left speechless. Let us take a look at celebrity weddings that are noted for their luxury, extravagance and exceptional style.

The weddings of Seemanto and Sushanto, sons of Subrato Roy of Sahara Group, were the biggest and the most expensive weddings in the world. Roy spent a whopping $128 million for the wedding of his sons in 2004. The venue, Sahara Shaher in Lucknow dazzled with lamps, torch lights, glass, flowers; and the auditorium was decorated in traditional as well as contemporary style. Over 11,000 guests, all the top politicians and bureaucrats of India were invited to a wedding that was nothing short of an extravaganza. The dinner was a lavish spread of more than 100 cuisines, managed by the Taj Group of Hotels. As a part of the occasion, food was distributed to more than 100,000 homeless people all over the country.

When it comes to the wedding of the daughter of one of the richest men in the world, it is sure to be a lavish and extravagant affair. Steel tycoon Lakshmi Mittal spent as much as $60 million for the wedding of his daughter Vanisha to investment banker Amit Bhatia. The wedding was a five-day extravagant function celebrated at Palace of Versailles and Vaux-le-Vicomte in France. The wedding invitation was a 20 page silver book that included plane tickets, hotel accommodation, etc. Highlights of the wedding included fireworks at the Eiffel Tower, performances by Kylie Minogue, over 100 dishes prepared by top Indian chefs and a wine bill reaching up to 2 million. It is no wonder that Indian weddings outshine the rest when it comes to pomp and splendor.

The wedding of Prince Charles of UK to Lady Diana Spencer in 1981 was remarkable and exceptional for several reasons. He was the heir to the British throne, and she, a beautiful young pre-school teacher. Over 3,500 people were invited to this ‘fairytale wedding’, and over 750 million watched it on the television. Diana’s wedding dress cost £9000 (£25,700 today), the engagement ring £30,000; while, the wedding cake cost £6,000. The wedding is recorded as the costliest royal wedding in modern times (costing more than $110 million today).

The wedding of Sheikh Mohammed bin Rashid Al Maktoum (ruler of Dubai) to his first cousin Sheikha Hind bint Maktoum bin Juma Al Maktoum in 1979 was one of the first and grandest major event in Dubai. The extravagant and luxurious wedding was no less than a national festival, as 5 days were declared as public holidays for the celebration. A stadium with a seating capacity of 20,000 was specially built for the wedding, which included entertainment in the form of aerobatics display by the Dubai Air Force, dances, music, displays of horse and camel riding, etc. Interestingly, his wedding to Princess Haya in 2004 was also one of the costliest weddings ever ($44 million). In today’s times, the wedding would cost over a $100 million, also making it as one of the most expensive wedding in the world.

Just like his parents, Prince Charles and Lady Diana, the wedding of Prince William was no less than a fairytale affair. The second in line to the British throne, Prince William, married a commoner Catherine (Kate) Middleton in 2011, in one of the largest weddings in Britain since his parents. More than 2000 guests were invited to the wedding and the reception at Buckingham Palace. Kate’s gown cost $300,000, the decoration costing over $700,000; and an equal amount was spent for security purposes.

The wedding of Russian billionaire Andrey Melnichenko to former Miss Yugoslavia, Aleksandra Nikolic is included in this list because of the large sum spent on the wedding. The wedding took place at Côte d’Azur in France. It is rumored that the billionaire built a Russian chapel specially for the wedding. Performances by Christina Aguilera and Whitney Houston for the wedding alone are believed to have cost more than 2 million each.

Felipe, Prince of Asturias and the heir to the Spanish throne, married Letizia, a journalist in 2004, in another example of a Prince charming marrying a commoner. The wedding was attended by representatives of more than 30 royal families all around the world. It was the first instance of a Spanish Prince marrying a commoner, and the first royal wedding to take place in Spain in the century. The dress of the bride was designed by Manuel Pertegaz, the celebrated designer who had dressed Jacqueline Kennedy, Audrey Hepburn, etc.

The wedding of American hotelier and businessman Vikram Chatwal had all the elements of a luxurious and extravagant wedding when he married model Priya Sachdev. The wedding celebrations took place for 10 days in 3 Indian cities – Mumbai, Udaipur and Delhi. More than 600 guests across the globe were transported to the wedding venue in chartered jets. The multi-million dollar event had spectacular festivities and events enjoyed by all the celebs in the country. The impressive guest list included Bill Clinton, HRH Prince Nikolaos of Greece, Lakshmi Mittal, Deepak Chopra, Naomi Campbell, etc.

The wedding of soccer star Wayne Rooney to his childhood sweetheart Coleen was no ordinary affair. He is one of the most famous and highest paid sportsman in the world. Coleen wanted a big wedding and it was nothing short of a lavish event. The wedding vows were exchanged in Italy, where around 65 guests were ferried in private jets. Celebrations took place for 4 days, and the highlight of the wedding was a masquerade ball aboard a $120 million yacht. Although counted among one of the most lavish weddings of all time, interestingly, pizza was served at the reception!

Delphine Arnault, daughter of Bernard Arnault (chairman and CEO of LVMH), is one of the richest woman in the world. When she married Alessandro Vallarino Gancia, heir to an Italian dynasty of wines, Gancia, it was sure to be a grand affair. The bride’s dress was one-of-its-kind, designed by John Galliano for Dior. The venue for the wedding was Cote d’Azur in France, decorated with thousands of white roses specially for the occasion. Many high-profile guests like Nicolas Sarkozy, Bernadette Chirac, Karl Lagerfeld, Elizabeth Hurley, Glenda Bailey, etc. attended the wedding.

*Figures mentioned in the article are approximate estimates and can vary when adjusted for inflation or when comparing in today’s values.

Royals, celebs and billionaires believe in living royally. Although many of these expensive weddings of celebrity couples have ended in divorce, they are still remembered for their spectacular show, extravaganza, and of course, luxury!