The Handfasting Ceremony: What are Its Rituals and Symbolism?

The ancient tradition of handfasting represented a profound spiritual union between a man and woman. It's a beautiful ceremony that's adapted in modern-day weddings, and celebrated with bewitching colorful cords that symbolize commitment to one another.

Home / Dresses / The Handfasting Ceremony: What are Its Rituals and Symbolism? 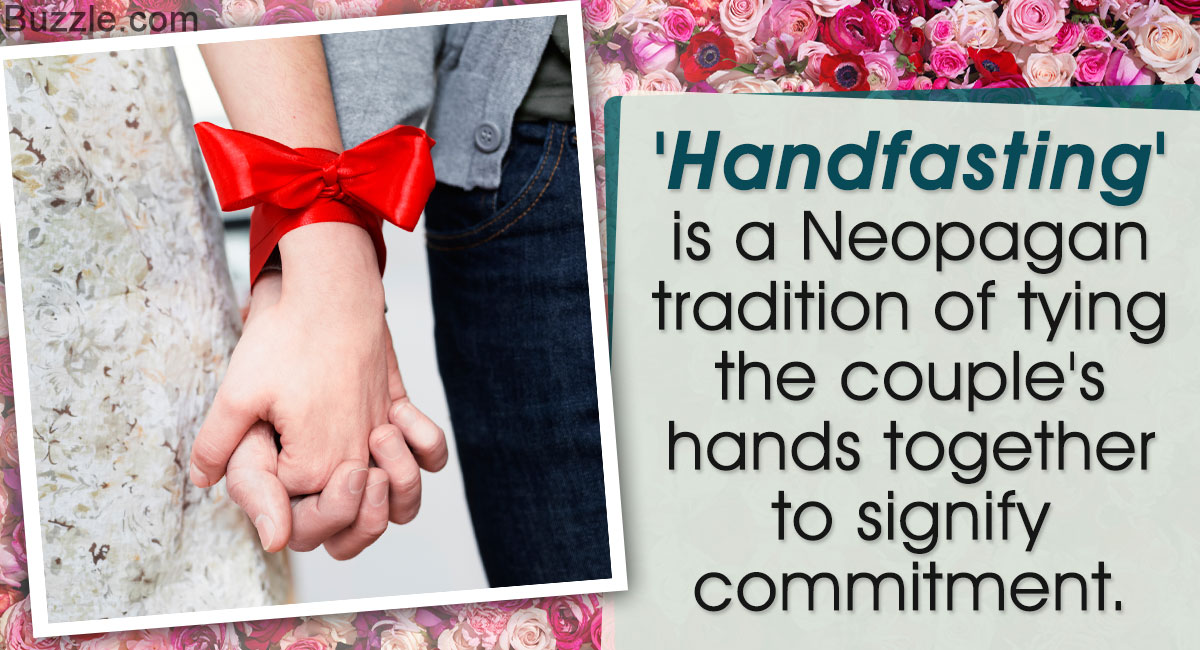 The ancient tradition of handfasting represented a profound spiritual union between a man and woman. It’s a beautiful ceremony that’s adapted in modern-day weddings, and celebrated with bewitching colorful cords that symbolize commitment to one another.

The popular phrases ‘tying the knot’, ‘bonds of matrimony’ and ‘hand in marriage’ are derived from this ceremonial ritual. This rite was famously featured in Prince William and Kate Middleton’s wedding ceremony.

In modern ‘PDA’ alert terms, the most common way a famous couple announces their union is by holding hands in public. This romantic gesture is so ancient that archaeologists recently dug up graves at a ‘lost’ chapel in Leicestershire, England, to find the skeletal remains of a 700-yr old couple holding hands even in death. Holding hands is like a public demonstration of ‘coupledom.’ It’s a subtle sign that says ‘I’m officially off the market’ and belong to my significant other.

This amorous gesture has been adopted since ages as a wedding ritual that announces the unification of two souls into a wedlock. Handfasting is an auspicious tradition that resonates unwavering commitment, with colorful bands intertwined between the wrists of the bride and groom as they pledge lifelong devotion to each other.

◆ Ritualistic binding of hands has been practiced in almost every ancient civilization like the Mayans, the Vedic, and the Celtic cultures, but the Scottish, Greek Orthodox, Wiccan and, most lately, same-sex couples prominently practice this tradition as a marriage ritual. This practice is significantly derived from the ancient infinity symbol depicted by the sun (female) and moon (male) in Indo-European cultures, or the sun (male) and moon (female) in Southern Mediterranean cultures.

◆ The term, handfasting, comes from the late medieval Old Norse: hand-festa meaning to strike a deal by joining hands. In holy matrimony, it means to bind in faithful commitment towards one another. During the 17th century, this tradition was rampant throughout Scotland with mutual consent from the couple without the church’s blessings. People simply exchanged vows and lived together as a couple after the ceremony. This practice was greatly denounced by the church as it was considered sinful and unofficial to be married without the church’s approval.

With the Marriage Act of 1939, this ritual was officially banned in Scotland. Similarly, the Kirk of Scotland also abolished this practice by the 18th century. Moreover, Lord Hardwicke’s Act of 1753 in England legalized marriages only performed by a clergyman. Due to these circumstances, the Scottish border town of Gretna Green became the common refuge for eloping couples who wished to perform the handfasting ceremony.

◆ Walter Scott’s novel, The Monastery revolutionized this ritual in the 19th century, by claiming that in ancient times this rite was a means to announce short-term commitment. It was sort of, like an engagement period between the couple for a year and a half to know each other after which they would officially get married or break off as per their wish. Since then, handfasting has been incorporated into wedding ceremonies as a universal theme regardless of the religion.

This symbolic rite typically involves binding a couple’s hands together with colorful cords, ribbon, twine or a silk sash while prayers are recited and vows are interchanged. Couples can choose to use a single string or twist three twines with each other to exemplify the entwining of the two hearts. The cords or ribbons are normally four to six feet in length, the threads can consist of multiple colors or a single color. Mainly silk is used as the official material and it may contain particular gemstones or good luck charms to sanctify the union.

Rope is mainly used in Latino ceremonies draped around the shoulder of the couple in a figure of eight. Kente cloth or grass plait is used in African-American ceremonies, the cords are tied to the bride’s right wrist and to the groom’s left wrist.

Some of the handfasting knots have been mentioned below.

It is also known as the True Lovers Knot and consists of two interlinking, overhand knots that create a harmonious figure eight.

This ancient Celtic symbol is around 600 AD old, it is mainly used in the Irish wedding traditions. For the pagan followers, it represents the forces of mother, maiden, and the core. For Christian believers, it symbolizes the Holy Trinity.

Among the Feng Shui believers, the cords are wrapped around in an endless circle six times around the wrists of the couple representing the cycles of birth and reincarnation. It also symbolizes good luck, longevity, and harmony.

According to Wiccan tradition, the couple cross their arms and join their hands in a symbolic representation of figure eight or infinity. The priest or priestess then unites them with cords three times. Some couples opt to remove it after the ceremony while others wear it till they consummate the wedding.

◆ The hands, particularly the wrists are bound during the ritual. One custom includes – while facing up each other, the couple intertwine their hands to form an infinity symbol while a cord is bound around their hands.

◆ As per German noble traditions, if the woman was a mistress then the ritual was carried out with the two left hands together without the tying of the knot, so that the woman could not claim the husband’s name or property. But her offspring would be legal heirs second in line to the man’s first offspring from his legal first wife. Hence it was also known as the ‘left hand ritual’.

◆ This rite is ideally performed before or after the exchange of rings. In Celtic traditions, it includes 13 colored ribbons where each has a significant meaning. In Pagan traditions, it is concluded with the act of ‘Jumping over the Broom.’

◆ The tradition is believed to have originated from the ancient Celtic tribes that migrated into Europe around 7000 B.C. before the origin of Christianity.

This pagan ritual was more of a public, economic, and political union among the royals during the ancient times. The marriage was validated publicly through this tradition and hence was widely recognized throughout England, Ireland, and Scotland. This ceremony was significant to the rural areas as the union created by a handfasting ceremony was regarded as a ‘common law’ marriage. In the Irish culture any couple who performed this ceremony were distinguished as being conjoined, even if they married in an unorthodox way.

◆ During those times the Scottish and Irish cultures viewed handfasting as a symbol of ‘betrothal’ between the couple rather than marriage itself. It continued over the centuries until Christianity arrived in these nations and such marriages were not recognized by the church.

◆ The Council of Trent in 1527 declared that matrimony was a church sacrament and it must be conducted in presence of a priest. In the 1700s, England shunned handfasting in a legal way but Scotland did not. Although it was not lawfully acknowledged, there were Irish couples who discreetly kept up with the tradition in a way to maintain their Celtic inheritance.

◆ Since 2012, non-religious and pagan rituals have been made legal in the Republic of Ireland. With this, couples are choosing to walk the non-religious way down the aisle. The Pagan Federation of Ireland and the Spiritualist Union of Ireland are now accepted as religious bodies and can execute legal weddings.

◆ For the modern Pagans, a handfasting ceremony symbolizes commitment towards a loving relationship. There are two types of practices prevalent in this culture, one is known as the ‘year-and-a-day’ commitment, while the other is a lifelong commitment.

◆ The ‘year and a day’ handfasting is not accredited as a legal marriage as the couple mutually decide to stay with each other for a year-and-a-day after which they probably renew their vows or choose to part ways. Modern-day couples see this as a great way to test their love and also at the same time declare it for each other in front of their loved ones. This rite is officiated by a licensed Pagan priest or priestess.

◆ The second kind is a lifelong commitment and equivalent to holy matrimonial. A Wiccan wedding can be held around any time of the year although certain feast days, like Litha (the Summer Solstice) or Beltane (Mayday), are believed to be more auspicious for the ceremony. Weather is considered as a significant omen since the ceremony is generally held outside, the bride and groom may or may not dress up in traditional outfits.

◆ The wedding ceremony is performed inside a sacred circle sanctified by the officiant with a ritual knife. The four elements earth, fire, water, and air are invoked along with the pagan Gods and Goddesses to bless the ceremony. The couple officially declare their union in front of the altar decorated with the colorful bound cords.

◆ The priest/priestess then presides over the exchange of vows, and at this point the couple usually exchange rings. The couple then perform the Element Quest by invoking each of the elements in turn to consecrate their union. After the quest, the officiant calls upon the deities to sanctify the ceremony.

◆ The couple then conclude the wedding by jumping over the ceremonial broomstick still bound to each other. Traditional handfasting cakes and wine is served to the guests after the sacred circle has been opened through a reverse casting spell. Wiccan handfasting is a charming and bewitching ceremony through which couples pledge their love in a traditional manner.

This enamoring tradition is gaining popularity not only because of its universal appeal but also because many young couples view it as a way to honor their ancient roots.